Cloning is defined as “the technique of producing a genetically identical copy of an organism by replacing the nucleus of an unfertilized ovum with the nucleus of a body cell from the organism”. The first animal that was cloned successfully was a sheep and it was named Dolly in 1997. The cloned sheep, Dolly was exactly similar to the naturally conceived sheep. The only difference between the two was: Dolly’s embryo was developed without the presence of sperm.

Dolly’s birth has brought a marked revolution in the genetic engineering technology. Over the years scientists have duplicated many non-human animals like mice, pigs, cows, dogs, monkeys etc. The research has extended to human cloning, but since years human cloning technology has remained in infant stages as there are many ethical concerns involved. Let us discuss how human cloning is done and what are the steps involved in it. 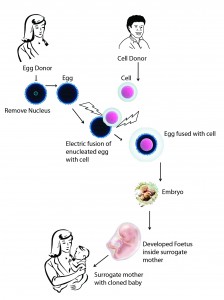 The main aim of therapeutic cloning is to develop stem cells from the cloned embryos which would help in treating many diseases/disorders. It also assists in organ replacement therapy. The procedure involved is similar to that of SCNT, but instead of inserting the embryo into surrogate mother, its cells are used to grow stem cells. These stem cells are used for the respective therapies.

Currently in India, gene cloning is in infant stage and hope this technique would excel in India and creates a therapeutic platform for many untreatable diseases and disorders in near future.