Proper regulatory system ensures the quality, safety and efficacy, and standard of medicinal product for sales, importing, and manufacturing. India’s pharmaceutical industry is one of the most highly regulated industries in the country. Understanding the regulatory scenario is extremely crucial due to the rapid and ongoing changes and due to the burden on the regulatory bodies to ensure a healthy supply of quality drugs at affordable prices to the Indian masses.

The principal regulatory body involved in the approval of manufacture, drug development and marketing of quality drugs in India is The Central Drug Standards and Control Organization (CDSCO) under Ministry of Health and Family Welfare which works on developing standards and measures for ensuring the safety, efficacy and quality of drugs, cosmetics, diagnostics and devices in the country. It regulates the market authorization of new drugs and clinical trials standards; supervises drug imports and approves licenses to manufacture the products.

At the state level, state drug regulatory authority issues licences to manufacture approved drugs and to monitor the quality of drugs along with CDSCO. 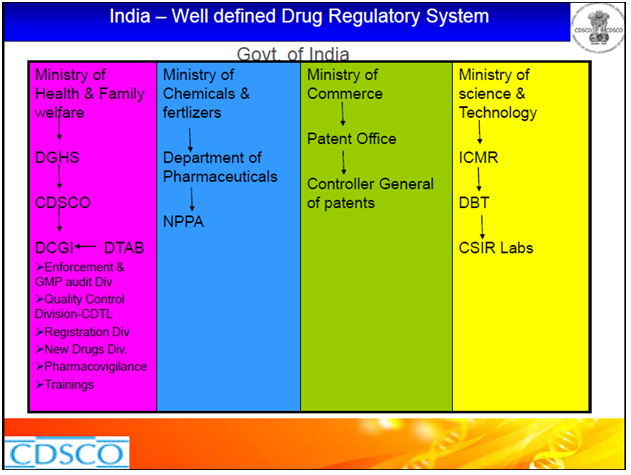 The regulatory bodies involved in the pharmaceutical industry and their functions are as follows:

Genetic Engineering Approval Committee (GEAC)– deals with genetic engineering and molecular biology, trials in which biotech products are used will be referred here by DCGI.

Department of Biotechnology (DBT)-oversees the development of modern biology and biotechnology in India.

National Pharmaceutical Pricing Authority (NPPA)– NPPA fixes or revises the prices of decontrolled bulk drugs and formulations and periodically updates the list under price control according to guidelines.

Drug manufacturing, quality and marketing in India is regulated under the Drugs and Cosmetics Act of 1940 and Rules 1945 which had several amendments overtime. The DCGI main head of Central Drugs Standards Control Organization (CDSCO), assumes responsibility for the amendments to the Acts and Rules. Other major related Acts and Rules include the Pharmacy Act of 1948, The Drugs and Magic Remedies Act of 1954 and Drug Prices Control Order (DPCO) 1995 and various other policies instituted by the Department of Chemicals and Petrochemicals.

Some of the main schedules of Drugs and Cosmetic Act that regulate the drug manufacturing and clinical trials are:

In accordance with Act of 1940, the control is at both Central and State government levels.  The DCGI, under the central government has five main functions: Controlling the quality of imported drugs, coordinating the activities of State FDAs, enforcing new drug legislation, granting approval to new drugs, and controlling the quality of imported drugs. State FDAs, on the other hand, monitor the drug manufacture, sale, and testing by companies in their jurisdiction.

For granting approval to new drugs, in addition to the DCGI, depending on the application whether it is for a biological drug or one based on recombinant DNA technology different departments involve in approval process.

Indian Patent system is governed by the Department of Industrial Policy. The Indian Patent Act, 1970 was amended through the Patents Amendment Act (2005). As per the provisions of Article 39(3) of the TRIPS Agreement, member countries have to provide protection to regulatory data submitted for market approval of pharmaceutical products under specific circumstances.

The WHO-GMP certification, which possesses two-year validity, may be granted both by CDSCO and state regulatory authorities after a thorough inspection of the manufacturing premises.  The requirements of Schedule ‘M’ for GMP have become mandatory for pharmaceutical units in India from July 1, 2005.

The recent regulatory revisions in the pharmaceutical industry and stricter patent laws have made it easier to conduct trials, making it the fourth largest market in terms of volume.

By providing contract services to the international pharmaceutical industry in the form of clinical development services CROs have entered the Indian market in the last few years.

In 1988, local clinical trials for new drugs were first made mandatory in India. There was also a phase lag as permissions for trials were granted for one phase behind the rest of the world. There were several incidents of ethical violations related to informed consent and with the regulatory initiative the Central Ethics Committee on Human Research (CECHR) and Indian Council of Medical Research (ICMR) conceptualized and issued Ethical Guidelines for Biomedical Research on Human Subjects in 2000. The trials are conducted only after approval from the Institutional Ethics Committees and consent of patients for participation is mandatory.

In 2001 Good Clinical Practice (GCP) guidelines were developed in line with ICH and GCP.

Later in revised Schedule Y the requirements of data submission on animal testing for permission to undertake Phase I, Phase II and Phase III clinical trials were laid down.Schedule Y revisions in 2007 permit Phase I trials to be carried out concurrently in India along with the rest of the world.

In 2005, Drugs Technical Advisory Board (DTAB) made GLP practices mandatory for all laboratories.

DCGI has taken many steps for strengthening the regulations like registration of CRO’s and monitoring their compliance with guidelines and registering the trials which ensure transparency.

There are plans to link the relatively new Indian clinical trials registry (CTRI) to theInternational Clinical Trials Registry Platform maintained by the WHO.

The Indian government made the registration of all clinical trials conducted in the country mandatory, which is applicable to alltrials that started after 15 June 2009 All clinical trials are being registered on the CTRI website, which is maintained by the National Institute of Medical Statistics and funded by the ICMR, the Department of Science & Technology and the WHO.

For an efficient and ethical clinical trial environment presence of a strong centralized regulatory regime is needed. Regulatory bodies are working towards new challenges and government is bringing in more changes in the regulations for reducing the time limits for approvals and making more accessible and approachable for global communities.

Role of Physicians in Clinical Research

Is Clinical Research Paving the Way in Africa?